The surcharge is called IRMAA, which stands for Income-Related Monthly Adjustment Amount.

I haven’t seen any numbers that show how much collecting IRMAA really helps the government in the grand scheme. I’m guessing very little. One report said 5% of all Medicare beneficiaries pay IRMAA. Suppose the 5% pay double the standard premium, it changes the overall split between the beneficiaries and the government from 25:75 to 26:74. Big deal?

As if it’s not complicated enough for not moving the needle much, IRMAA is divided into five income brackets. Depending on the income, higher-income beneficiaries pay 35%, 50%, 65%, 80%, or 85% of the program costs instead of 25%. The lines drawn for each bracket can cause a sudden jump in the premiums you pay. If your income crosses over to the next bracket by $1, all of a sudden your Medicare premiums can jump by over $1,000/year. If you are married and both of you are on Medicare, $1 more in income can make the Medicare premiums jump by over $1,000/year for each of you. 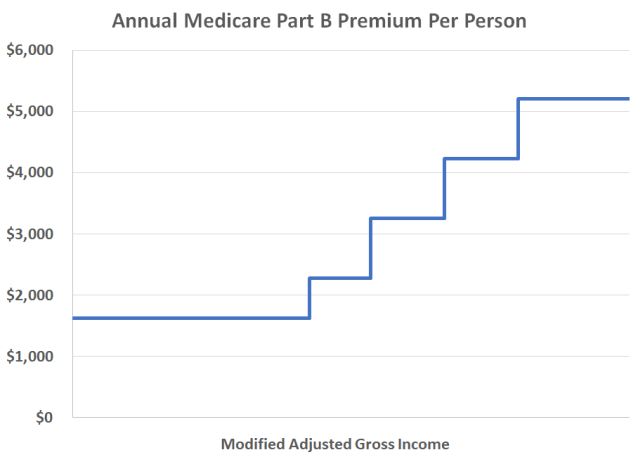 So if your income is near a bracket cutoff, see if you can manage to keep it down and make it stay in a lower bracket. Using the income from two years ago makes a little harder. Now in 2019 you don’t know where exactly the brackets will be for 2021. Still, you can make reasonable estimates and give yourself some margin to stay clear of the cutoff points.

Higher-income Medicare beneficiaries also pay a surcharge for Part D. The income brackets are the same. The surcharges are relatively smaller in dollars.

The standard Medicare Part B premium is $135.50/month in 2019. A 40% surcharge on the Medicare Part B premium is about $650/year per person, or about $1,300/year for a married couple both on Medicare. In the grand scheme, when a couple on Medicare have over $170k in income, they are probably already paying a large amount in taxes. Does making them pay another $1,300/year make that much difference? Nickel-and-diming just annoys people. People caught by surprise when their income crosses over to a higher bracket by just a small amount get mad at the government. Rolling it all into the income tax would be much more effective.

Oh well, if you are on Medicare, watch your income and don’t accidentally cross a line for IRMAA.

Say No To Management Fees

If an advisor is charging you a percentage of your assets, you are paying 5-10x too much. Learn how to find an independent advisor, pay for advice, and only the advice: Find Advice-Only.

Do you and your partner save for retirement separately or together?

India’s 25 best start-ups to work for, according to LinkedIn

Keep a job that pays more, or take the lower paying offer that comes with full…